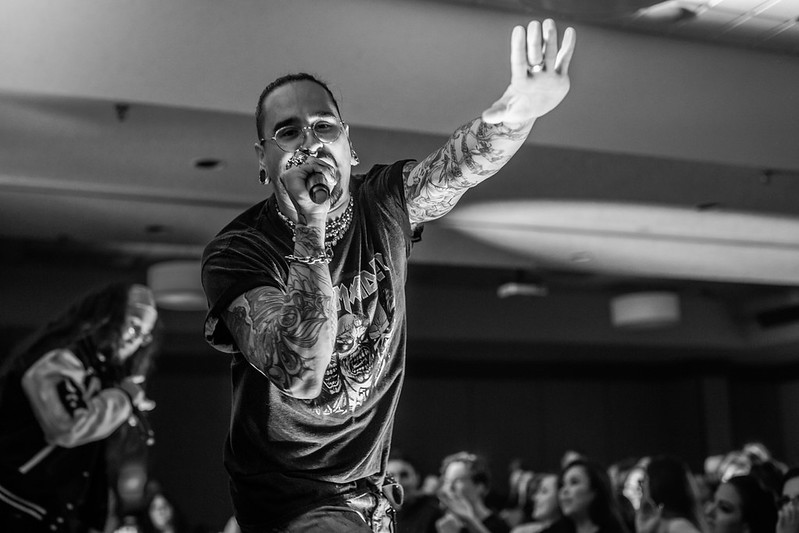 Music makes things shake. It is a sensation that transcends simple auditory input: music can make you tap your feet, change your mood in an instant, and stir long forgotten memories. It is designed to move us in more ways than one.

Music can also shake society. Chuck D, one of the founders of Public Enemy, said that “Songs are like little earthquakes: after Fight the Power, the world shook.” A powerful image, right? The right song can send tremors across a culture, shaking a population into awareness and challenging the status quo.

There are countless examples of artists using music to respond to inequality and to call for change. Rage Against the Machine, for example, released Killing in the Name in response to the LA Riots of 1992. Green Day released American Idiot in 2004 in protest to the US war in Iraq. Grandmaster Flash and the Furious Five, one of the first hip hop acts, wrote The Message as an attempt to capture what life was like in the Bronx, New York. In the late 1970s and early 1980s, the Bronx was in rapid decline, and had been called a “city of death” due to the lack of opportunities that led many to leave the city. In 1985, the most popular artists in multiple genres–hip hop, rock, pop, country, and punk–collaborated on Sun City. The song’s chorus, “I ain’t gonna play Sun City” declared that the performers refused to play the Sun City venue in South Africa because of Apartheid. In 1969, Creedence Clearwater Revival (CCR) released Fortunate Son, a response to the fact that poor young men (often young men of colour) were drafted into the military during the Vietnam War far more frequently than white, wealthy young men. The Sex Pistols released God Save the Queen in 1977, the year when Queen Elizabeth was celebrating her 25th year as queen. The UK, however, had little to celebrate due to strikes and a lack of government funding. The song captures the disillusionment of the youth at the time with lines like “there’s no future”.

Thanks to new technologies that allow artists to share their work, indigenous acts are making things shake.  Platforms like YouTube and SoundCloud allow these artists to record and disseminate songs that reflect their worldview and, in many cases, in their own languages. Emma Stevens and her classmates, for example, recorded a Mi’kmaq version of Blackbird by the Beatles which received an endorsement from Paul McCartney and earned her a performance at the opening of the United Nations Habitat Assembly. There is also Inuktitut singer Aasiva, whose incredibly infectious melodies will stay with you long after your initial listen.

Like Chuck D, some of these artists hope to start their own social earthquakes. The Halluci Nation (formally A Tribe Called Red) use the words of Romeo Saganash’s angry address to the prime minister in OG (explicit). The group left the following on the description of the video:

It would be impossible to overstate the impact that @romeosaganash’s words had on the Indigenous world and on us personally. We feel that the stand he took that day in parliament needs to be remembered, memorialized and commemorated. This is a celebration of that moment. Romeo, the #HalluciNation salutes you.

In an interview with CBC Radio, JB the First Lady of the Nuxalk and Onondaga nations called her work “political but positive”. Get Ready Get Steady, clearly inspired by hip hop’s R & B roots, explores personal and familial identity through its footage and its lyrics; she also contributes to the Idle No More movement.  Snotty Nose Rez Kids’ The Warriors (explicit lyrics) is a song about resistance against the Kinder Morgan Trans Mountain pipeline. The lyrics evoke images of Colin Kaepernick, Rosa Parks, and Flint intertwined with the calls to protect indigenous land.

As much as I am drawn to Chuck D’s quotation, it is also troubling. The full quotation is actually: “Songs are like little earthquakes: after Fight the Power, the world shook … then went back to the way it was.” D argues that, for all its power, music is ephemeral; its ability to shake us is temporary and, if we are not careful, we can easily return to where we were before.

5 Indigenous artists you need to know in 2018 | CBC Music