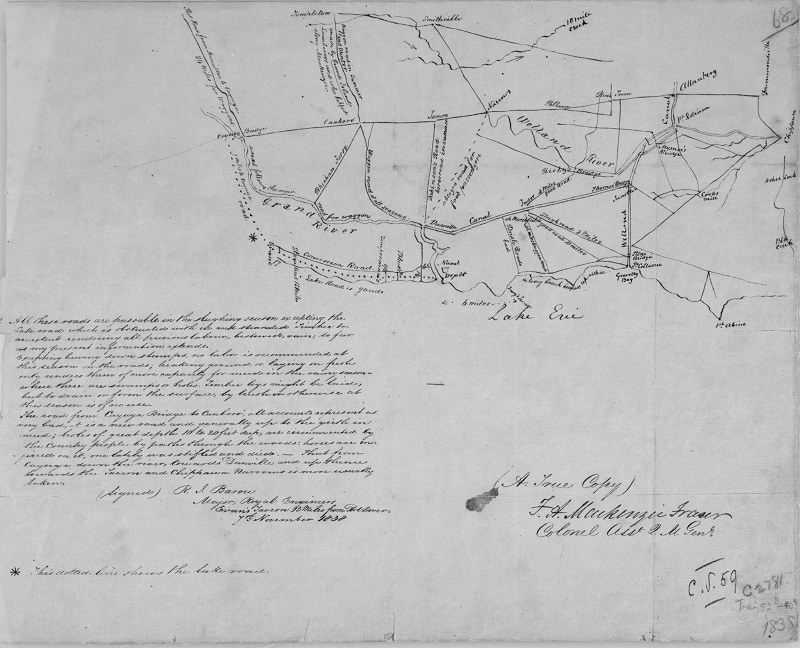 This lesson will centre on a variety of aspects of the growing transportation networks in upper Canada between the war of 1812 and Confederation.  Students will have the opportunity to look at need for, development of and finally reflect on the effects of the new transportation network first from the perspective of the European colonists and then from that of the First Nations people.

Students should be comfortable with the early developments of Upper Canada and more specifically the relationship prior to and during the first half of the 19th century between the European settlers and the First Nations people.  Students should have some level of comfort with the difference between primary and secondary documents and be comfortable attaining information from both.  Although not necessarily needed to understand the main concepts some understanding of the changing role of British involvement in Upper Canada after the War of 1812 would give the greater perspective on the period of transportation development they are investigating.

Much of the work will be done in groups which can be pre-planned if the teacher feels this would better serve the class.  Group members can support one another and for the independent writing students can have access to computers or have adjusted expectations in their success criteria for those with IEPs.

A brief presentation by the teacher will provide some of the context around the period of time and the region to be investigated.  Mostly this will ensure that all of the students are comfortable with the prior knowledge needed for the next two classes.

Students will divide into groups where they will be assigned readings (one primary and one secondary document) which they will use to investigate an individual and the societal group they represent (farmers, clergy, merchants, military/militias).  The focus of the readings will be on road development and the varying needs for using and responsibilities of building and developing roads.  Using short preselected readings students will fill out graphic organizers present their findings to the class.

For this activity new groups will be made comprised of one member from each of the investigative groups.  Group members will play the role which they had previously investigated.  Using what they know of their character’s needs and road responsibilities they will build roads in lengths based on the luck of a dice role.  Students will have a preselected number of turns (mostly based on time).

Once the turns have been completed and the roads and cleared land have been drawn on the map groups will put the maps away in a pre-assigned location where they will be stored until the next history class.

Students will each be given a small reading detailing a First Nation including their original home territory as well as their traditional food sources (hunting, fishing, cultivation, etc.).  Once they have completed a basic work sheet they can move on to the mapping activity.

Students will be asked to reflect on how the European establishments and roadways would have affected each of the First Nations’ way of life. Thinking back to when they were in the role of colonists students will also reflect on what they may have done differently in regards to their road and territorial development had they been aware of and had a better understanding of the First Nations people from that area as well as their needs and traditions.

Each group will present the two or three most important or impactful things that came from their reflections on the activities.  Each presentation should have at least one point on the effects that the road development would have had on the First Nations population.