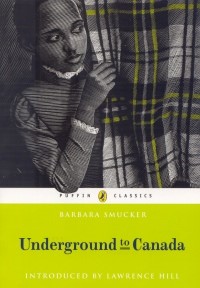 Book reviews in a continuitng series by students of John Myers at OISE.

Underground to Canada (1977) is a novel authored by Barbara Smucker that sheds light on the flight of slaves from the American South to Canada. The book details the life of a young girl, Julilly, whose life has been marred by slavery, and a tragic slave trade which separated her from her mother, Mammy Sally. Upon her arrival to a new, harsher plantation, Julilly and a handful of friends plan their escape from slavery, and embark on an incredible journey to seek freedom in Canada. The book’s main focus in on the tragedy of slavery and its impact on the individual. The separation of a child from their mother, physical and emotional abuse, as well as the inability to find oneself are ways in which the author attempts to frame the tragedy that is slavery. A second key idea found in the book is inequality. There is a clear division between what constitutes a slave, and what constitutes a citizen. Moreover, the novel embeds subordination within this concept of inequality through the words and actions the author associates with slave plantation owners and their white workers.

This book is suitable for grade levels 5 and up, and would fit perfectly into any literacy program, especially as a component of Black History Month. However, a debriefing conversation with the class is necessary in order to address, neutralize and better understand some of the language used in the book. In terms of its historical value, incorporating this text within the grade 8 curriculum would allow for overall expectations related to communities in Canada to be sufficiently covered. This includes the impacts of large scale social events that impact Canada’s people. This book would also account for the types of actions that groups in Canada took in order to improve their lives.

This book will have its greatest impact on its ability to critically examine perspectives. Actions taken by individuals, individuals identifying themselves within different communities, and larger societal narratives can be considered along side each other. Especially if seen alongside primary source documents, students can begin to evaluate and complicate what it means to live in a diverse society. It will impact how teachers interact with their students, and how students interact with one another whether in social or academic situations. It allows for a critical eye to be applied across the curriculum, and help students recognize the importance of considering many perspectives rather than submitting to stereotypes.

All the Light We Cannot See

“All the Light We Cannot See,” written in 2014 by Anthony Doerr, tells the story of the lives of two different characters during World War II. Marie-Laure LeBlanc is a young girl who lives with her father, a locksmith and keeper of the thousands of keys at the Museum National d’Histoire Naturelle in Paris. At the age of six Marie-Laure lost her sense of sight, so her father built an intricate miniature model of their neighbourhood to help her memorize and navigate herself around the area. When the Nazis occupy Paris, Marie-Laure and her father flee to live with her uncle in the citadel Saint-Malo, carrying one of the museum’s most valuable and possibly dangerous stones. Meanwhile, Werner Pfennig lives with her younger sister and other children at an orphanage in a mining town in Germany. After his discovery of a broken radio, he fixes it and becomes an expert at building and fixing this new instrument. Soon after, his talent receives the attention of an elite Nazi school that emphasizes on extreme military training. Through the war, this new German soldier then finds himself in Saint-Malo, where the two characters’ stories come together as they try to survive the devastations of the war.

This text is told in third-person narration while involving multiple perspectives. Each chapter alternates between the points of views of the main characters as well others living in the area during this period. In addition, the book is organized into separate sections that go back and forth between time periods: the beginning of the World War II and throughout .

Doerr’s book can be integrated into the academic and applied grade 10 History curriculum within section. Either of the grade 12 history courses might find this resource a useful entry point into historical perspective taking.

One of the best aspects of this story is the amazing descriptive language the author used. Not only did the author make the story more personal by focusing on these two very different characters and showing the multiple parties involved and affected by the war, Doerr was able to describe the setting and environment in such detail that made it extremely realistic for the reader. This story can serve as an introduction activity by having students reading the book as a whole or focusing on certain excerpts of the story that demonstrate the living conditions of the people living through the war. Since the book focuses on the lives of characters living in France and Germany and each chapter alternates between their perspectives, it can be used as an activity in which students create additional chapters for their own character living in Canada during this period and integrating their story into Marie-Laure’s and Werner’s. The text also allows for cross-curricular connections, such as language or science (as it speaks to the scientific understanding of sound and light waves).

Genghis Khan and the Making of the Modern World

This book can be used to bring in a less Eurocentric perspective in the history classroom, specifically in the Grade 11 course—World History to the End of the Fifteenth Century, CHW3M—where one explores the many civilizations and empires up until the fifteenth century. Of course, one can apply it to the Grade 12 World History courses as well, since the influence of the Mongols continue even to this day. As the book is organized in a chronological manner, each section can be explored as its own mini-unit, where the class can explore how the empire was formed, and how their interactions with the other civilizations that they fought or traded with helped to shape the world that they know. It is particularly important, because the Mongols made use of anyone that they believed could benefit them, regardless of religion or origin. Moreover, they were a medium of sorts that helped to transmit knowledge and technology from the East to the West. So it would be very beneficial for students studying World History to learn how certain technologies or ideologies made their way across the continent of Asia and Europe.