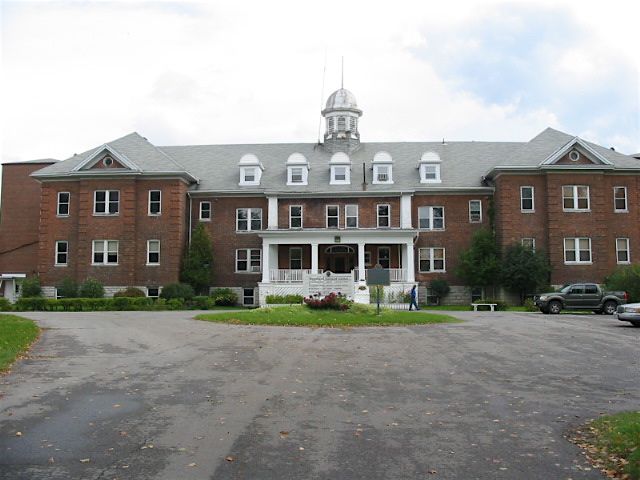 Our history subject council, Toronto History Humanities and Social Science Subject Council (THHSSSC), had been planning a trip to the former Residential School in Brantford for quite a while. We finally went on May 26, 2017. The Woodland Cultural Centre in Brantford, home to the under-renovation former Mohawk Institute, made for a revelatory trip.

The Mohawk Institute, in operation from the 1830s to 1970, brought the TRC’s Calls to Action home to me and many of my fellow visitors. I left feeling that every Canadian should visit a former Residential School and hear a survivor speak.

Even before hearing any stories specific to this school, the visitor gets an ominous feeling when approaching up the long driveway leading to the 1903 building. The building has that heavy institutional look, not a student-friendly appeal. After learning what happened in the building, it seems even more imposing because now you’re thinking of it from the perspective of a scared child.

Woodland Cultural Centre houses a museum that tells the story of the people of the Haudenosaunee Confederacy. Their collection contains items left behind in the former school. Most touching were the quilts that were found up in the rafters of the building, left there by the cold and lonely students wishing for the comforts of home. In the virtual tour video other objects are shown: candy wrappers, marbles, poker chips. The building itself and its contents are historical evidence of the human stories that occurred in this brutal place often called the ‘mush hole’ – if children refused to eat a meal of overcooked porridge, the exact same food and bowl would be given to them for the next meal, possibly two.

After our virtual tour of the building and actual tour of the museum, we were lucky to hear from a survivor, Geronimo Henry, now 80 years old.  Geronimo’s mother sent him to the Mohawk Institute in 1942 after his dad left and she had to choose between walking to her job or sending him to school. As Geronimo revealed, she never visited him, which meant he didn’t go home in the summers like some of the other children. He spent 10 years there. It was heart wrenching to hear him talk of his anger toward his mother, later his forgiveness of her. It also tugged at the heart strings to learn of the way he and the other children entered the school – each was given a number (48 in his case and 36 to his brother) and told that’s how they’d be referred to. It’s hard to imagine a child spending 10 years known as a number – as he recounts, it was sewn into his shirt, his pants, even his socks.

Geronimo Henry speaking to students in Waterloo, 2016. From the Waterloo Region Record.

To hear an 80-year old man use the language of regimentation to refer to his “school” is very sad for an educator. He started working when he was seven. Boys like him worked on the school’s farm. They milked cows and gathered eggs yet they never got to enjoy those foods. We as educated teachers may know that kids in the schools were malnourished, but to hear it from am survivor makes one cringe. To hear that boys scavenged food at the local dump built adjacent to the school property is shocking.

I looked at the run-down school building differently after Geronimo’s talk. I saw it almost as a monster that ground down little children. Walking around the outside in the tall, messy grass, with bricks strewn here and there and machinery lying about, I felt ashamed as a Canadian yet somehow empowered with new perspective.

It was an eye-opening day. It’s crucial for teachers to ensure the truth is heard and to make it matter to all Canadians.