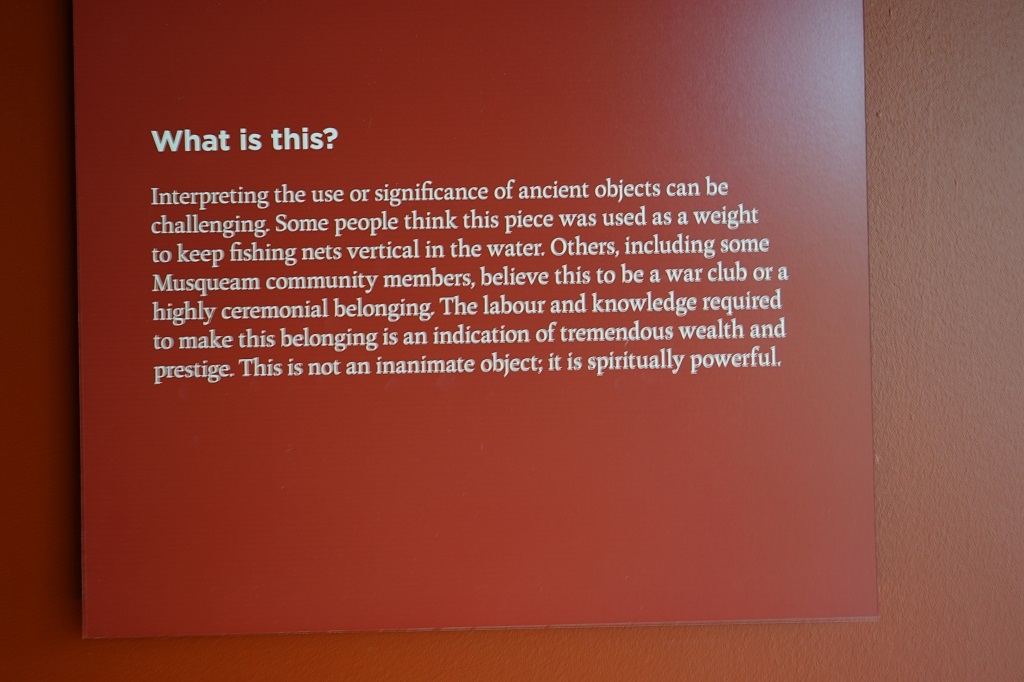 In the summer of 2016 I had the pleasure of visiting the innovative Museum of Vancouver (MOV).

Their prize-winning exhibit, c̓əsnaʔəm: the city before the city, a collaboration of the University of Waterloo and the UBC Museum of Anthropology, really made me think about what historical perspective looks like in the real world.

The Musqueam people occupied the territory in and around Vancouver long before the arrival of colonists. The exhibit aims to address not only how the Musqueam people lived, but how they and their artifacts have been interpreted in the past, including by museums. It must also be noted that Musequeam people exist today – their culture is alive. They play a role in the modern city of Vancouver and in how the city’s past is seen by its diverse peoples.

An object accompanied by a wall label titled “What is this?” really caught my eye, so much so that I didn’t even take a picture of the object it was describing.

“Interpreting the use of significance of ancient objects can be challenging. Some people think this piece was used as a weight to keep fishing nets vertical in the water. Others, including some Musqueam community members, believe this to be a war club or a highly ceremonial belonging. The labour and knowledge required to make this belonging is an indication of tremendous wealth and prestige. This is not an inanimate object; it is spiritually powerful.”

It reminds me not to be dismissive of seemingly mundane objects.

Another label, “c̓əsnaʔəm is not a midden,” also got me thinking of the importance of the words we use to describe objects or settlements of the past. I must have stood in front of that red panel for a good 10 minutes processing its implications for the vocabulary I use in class.

“c̓əsnaʔəm is sometimes called the Great Fraser Midden, the Marpole Midden or the Eburne Midden. Middens are often described as ancient refuse heaps. c̓əsnaʔəm was more than a site of discarded marine shells and fish and animal bones. The shell midden at c̓əsnaʔəm indicates a large human presence in the area. The art and technology of the belongings found there bring the culture of our ancestors to life.”

Brilliantly said! While not every single object from the past can be ascribed significance, the way we see and speak of the material history should certainly be done with respect.

The way we have dealt with the past has not always been respectful. We must all be mindful of inclusive historical perspectives as we move toward a future of reconciliation.